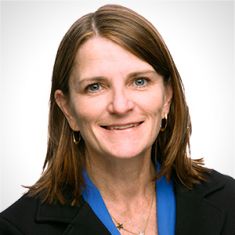 Building her career in publicly funded healthcare and state government, Jane Longo is a program, policy, financial, and operations expert. She returns to HMA after serving the State of Illinois as deputy director of New Initiatives in the Department of Healthcare and Family Services, the most recent appointment in a long career with the state’s budget and health and human services departments.

In her most recent position, Jane oversaw all eligibility activities for Medicaid, CHIP, and state-funded health benefit programs and served as business lead for operations and technical refresh of the Illinois Integrated Eligibility System operations.

While with HMA, Jane served as interim director of eligibility and enrollment for the CCHHS, Department of Managed Care. In this role, she organized and led staff and vendors in development, implementation, and operations related to eligibility and enrollment for newly eligible ACA adults in the Cook County Early Expansion waiver program and the transition from a waiver program to the CountyCare Medicaid health plan serving multiple Medicaid populations. She also led Cook County communications with the Illinois Department of Healthcare and Family Services and the Illinois Department of Human Services regarding eligibility, waiver, and managed care policies and procedures. During her tenure, enrollment efforts resulted in CountyCare waiver membership of more than 102,000 in 18 months.

Jane advised CCHHS leadership on waiver and health plan implementation and operations including developing best practices to resolve issues, minimize risk, and achieve program goals while complying with state and federal requirements. Her work with CCHHS, the Cook County Sheriff’s Office, and the non-profit organization Treatment Alternatives for Safe Communities (TASC) to provide Medicaid application assistance at the Cook County Jail resulted in more than 1,000 jail detainees enrolling in Medicaid.

During her tenure with the State of Illinois, she also served as chief of the Bureau of Medical Eligibility Policy in the Illinois Department of Public Aid (now Illinois Department of Healthcare and Family Services) and as bureau chief for KidCare, Illinois’ integrated program of Medicaid and SCHIP health benefit programs for children and parents. In these roles, she directed and performed Medicaid eligibility policy analysis, wrote Medicaid and SCHIP state plan amendments, and negotiated approval with federal staff.

Jane earned a bachelor’s degree in political science from the University of Illinois at Urbana Champaign.